We invite you to enjoy some of the artworks produced by our members - just click on the thumbnail images to view the works enlarged. For more about an artist click on the name. There is also a link above to our annual pottery and mosaics exhibition gallery.

For a closer look at Thalia's artwork and to discover more about her artistic career please visit her website at:

Opens in a new window 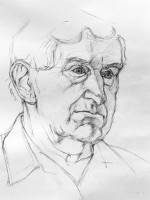 Colin was a teacher and university English lecturer at Burwood for most of his working life, His artistic abilities were mainly directed to theatre productions, in set design, props, posters and masks. He was helped into watercolour by Bill Andrade at Mitcham Arts.

When Greg Allen came to teach at Whitehorse Arts Colin eagerly embraced the opportunity to learn from a master. He like to use his watercolours for portrait, life drawing and landscape en plein air.

Since retirement his activity in art has been enthusiastic. Whitehorse has supplied him with many opportunities, as has travel.

He gets great support from Dot who is also very active in art with her mosaics. 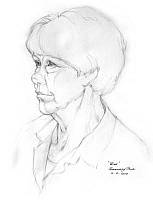 Dot Browne has enjoyed being a primary school art/craft teacher for the last 25 years of her teaching career, leading an art teacher's network for most of that time.

She was influenced to try mosaics herself after she organised a mosaic tile project at Rangeview Primary School as a result of the Artist in Schools grant from the City of Whitehorse. Deborah Amon-Cotter was the designated mosaic artist and Dot learned how to create mosaics as a result of Deborah's teaching.

Since her retirement in 2008, Dot has been able to devote much more time to mosaics and has very much enjoyed her experience and thanks Deborah for getting her started.

Alan Close is an artist/illustrator with over 40 years experience.
He was for a number of years Art Director with Hallmark Cards and is experienced in fine art, design, photography, illustration, and mural art. Alan is currently a tutor and vice-president of Whitehorse Arts Association and is responsible for setting up training programs for Artists. He is the founder of the Artstream program for developing Artists at Whitehorse Arts Association and Glen Park Community Centre and currently tutors also at Monash University Short Courses. He has tutored specialist drawing courses at the Australian Guild of Realist Artists Melbourne and is also a demonstrating artist and judge for various regional Art societies.
He has been described as a gifted encouraging tutor with a diverse knowledge of art.
Alan teaches all mediums and his favourite subjects range from:
realist painting, figure and portraiture, impressionism to abstract art.
Alan is very enthusiastic about his highly successful family portrait program. It has a 96% success rate where even beginning artists produce wonderful portraits of family and friends. Alan says over 300 portraits have now been completed giving lots of joy to families.

Ray was born in Geelong, back in the days of witches and broomsticks as he described it, and, along with many contemporaries from Whitehorse Arts, lived through the aftermath of the first world war, the depression and the second world war before entering the school of architecture at the Gordon Institute of Technology. His interest in art was already firmly focused and a career in fine arts would have been his first choice. Ray completed his studies at the University of Melbourne following which he worked for several architectural firms before working in partnership with Wally Colman and later in sole practice. From the 1990s onwards he studied with various painting tutors and art societies and was a member of Mitcham Arts and Whitehorse Arts from 1965 until he passed away in July 2016. He was a significant contributor to WAA serving on the committee as president and general committee member.
He taught painting privately and for art societies for over twenty years including voluntarily teaching drawing and associated skills at Whitehorse Arts for many years. Survivor of one man and group exhibitions over the years, he has won many prizes and awards. Ray is a member of V.A.S., A.G.R.A. and Whitehorse Arts. Retirement has allowed Ray to pursue his passion for drawing and painting and to share his talent and experience with his fellow artists and pupils.

Please contact us via the Contact link at the top of the page if you would like to know more about any of our artists and their work.